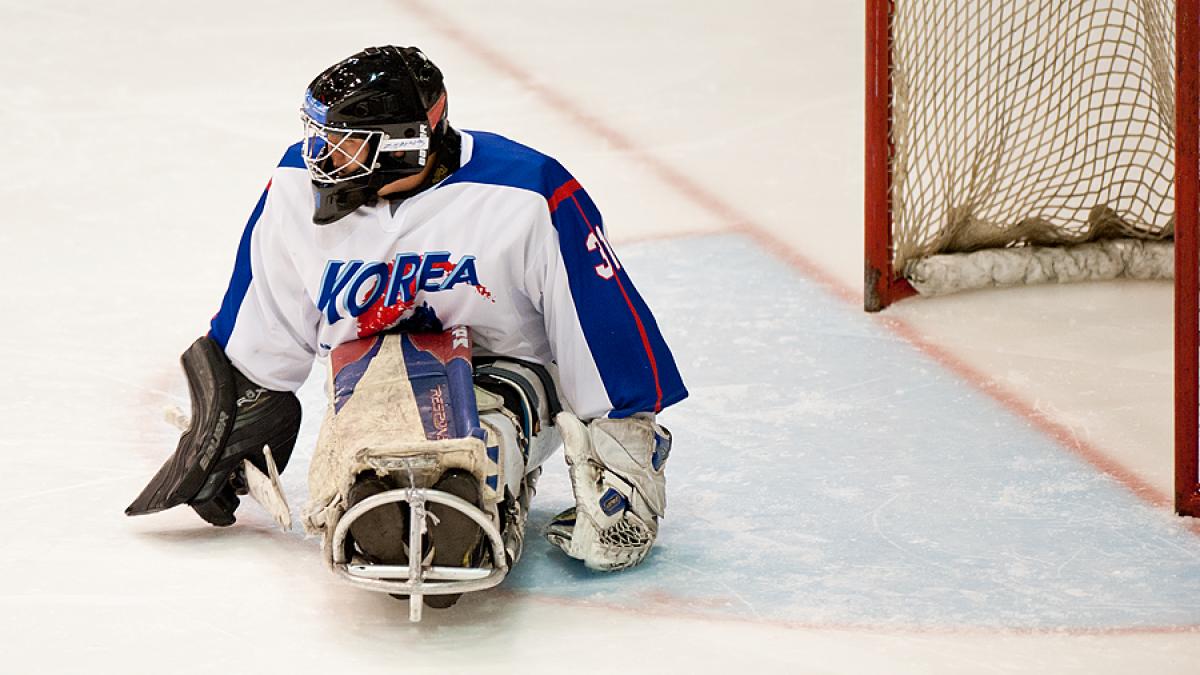 Goaltender Man-Gyun Yu posted a 4-0 record and a .894 save percentage in the net in October 2013 to help South Korea win the IPC Ice Sledge Hockey Qualification Tournament.

ⒸLuc Percival
By Ryan McKenna | For the IPC

"I'm the best goalie in the world.”

Stopping rubber. That’s what South Korea’s Man-Gyun Yu has been doing a lot of lately for an ice sledge hockey team on the rise.

The 41-year-old Yu started playing sledge hockey at the age of 32, after coming over from playing wheelchair basketball. He found the sport of sledge hockey through pure curiosity and the urge to try something different, something in winter, and loved it.

“I like the violence of this sport, such as body checks or the powerful shooting,” Yu said. “I love the fact that I can enjoy a strenuous sports same as non-disabled people.”

Before a life-changing accident, Yu was an athlete with dreams of making the Olympics and representing his country.

“After I had my accident, I started to exercise again, and now finally I have been given a chance to stand on that stage,” he said. “I'm so excited about that, but when I stand on the rink at Sochi, I'll empty my mind and do my best for each game.”

With just over 40 days until the start of the Sochi 2014 Paralympic Winter Games, Yu will be a crucial part of South Korea’s success if he and his No. 6 ranked team will be victorious in March.

It was a decent year for Yu in net in 2013, posting a record of 5-9 with a 2.66 goals against average and .815 save percentage in tournament play. Some of his best goaltending came in the IPC Ice Sledge Hockey Qualification Tournament in Torino, Italy, from 20-26 October, where he posted a 4-0 record and a .894 save percentage.

When playing the world’s best, he turns his game up an extra notch.

After losing to Canada 5-2 in preliminary play at the 2013 World Sledge Hockey Challenge in Toronto, Yu and his South Korean teammates were determined to put up a tougher fight in the semi-finals, and they did.

Although losing 2-1 and making 25 saves, it was still a tough loss to swallow for Yu.

“Because I did my best and I'm not a person who cares too much about losing points, the fact that we lost the game broke my heart more than losing points,” he said.

Being a goaltender however, wasn’t always in the cards for Yu. Just four years ago, he decided to make the transition to goaltending.

Although sledge hockey has some extremely high points, such as the second-place finish in 2012, Yu also admits the downside of being a goalie.

“The loneliness,” said Yu. “Because I have to think alone, judge alone, stand alone and take a responsibility of all mistakes from my teammates, sometimes I feel lonely.”

With the success of 2013 now behind him, Yu will look to join the elite goaltenders in the world come 8 March when South Korea starts their preliminary round competition against host Russia at the Paralympic Games.

Normally, sledge hockey fans would think of Russia’s Mikhail Ivanov, the Czech Republic’s Michal Vapenka or the USA’s Steve Cash when they think of top goaltenders; but Yu’s determined the prove them wrong.

"I'm the best goalie in the world,” he said.