Nearly half of all gold medallists in para-alpine skiing at Sochi 2014 were under the age of 23, showing the sport has a bright future ahead of it. 21 Dec 2014
Imagen 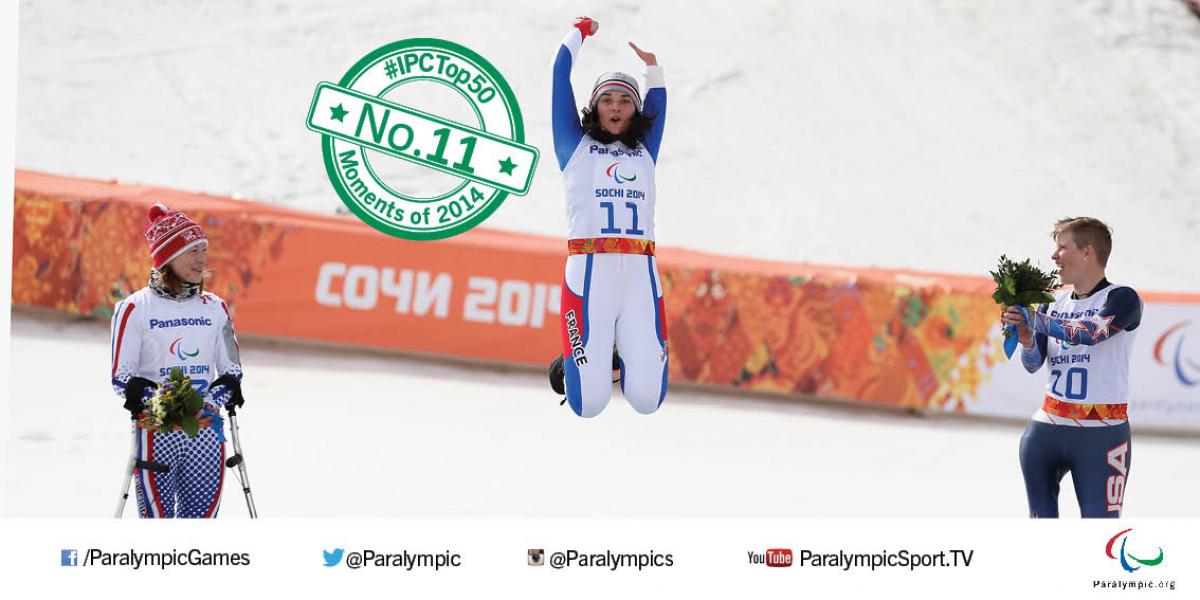 Marie Bochet jumps into the air to celebrate winning Paralympic gold at Sochi 2014.

“I was just starting in disabled sports competitions when I was invited to this development camp. It is there that I was taught to ski and to become a champion."

The alpine skiing competition at the Sochi 2014 Paralympic Winter Games was dominated by medal winning youngsters, so much so that their achievements have made No. 11 in the IPC Top 50 Moments of 2014.

The Sochi 2014 Paralympic Winter Games were a record breaking success with more spectators and TV viewers than ever before.

One little known fact is that nearly half of all gold medallists in the alpine skiing competition were aged 23 or under and many were graduates from a 2006 IPC Development Camp held in Deux Alpes resort, France.

Marie Bochet was one of them and the French skier won four gold medals in Sochi, achievements she says were beyond her wildest dreams.

“Each medal was amazing and together just fantastic,” said Bochet, who won Paralympic gold in the slalom, giant slalom, super combined and super-G in 2014.

“I had not dared to dream I would do as well. Deep down I’d set my heart on winning one, so I was surprised, happy, accomplished and proud.”

Bochet, 20, was also delighted to share the podium with so many other young athletes in Sochi.

“For some time now we have seen more young people on the circuit. They do not take part just to ski, they take part to win against the older competitors,” she said.

“I find it quite nice because they bring new energy, a little folly of their youth, it is very energising.

Although she will not turn 21 until February, Bochet is widely regarded a veteran on the para-alpine skiing circuit having competed at two Paralympic Winter Games and two World Championships.

In 2013 she became the first skier to win five world titles in one Championships and is now the woman to beat in the women’s standing class.

She credits the 2006 development camp as putting her on the road to success and says it is important that the work to develop more young talent is continued.

“I was just starting in disabled sports competitions when I was invited to this development camp. It is there that I was taught to ski and to become a champion,” explained Bochet who attended the camp alongside the Austrian duo of Claudia Loesch and Markus Salcher, both winners of world and Paralympic titles.

“The camp helped my understanding of disability, as spending the week with other young people with disabilities helped me to overcome my own. It was also my first international experience, and it allowed me to discover the disabled sports world more deeply.

“I find it very important to focus on youth, sport is a great school of life and can enable young people to realise that their disability does not limit them. In sport the difference between able bodied and a disabled person is almost zero.

“The IPC is doing a lot to bring through the next generation of athletes, but with French alpine skiing it is difficult to do so. It is therefore necessary to raise awareness amongst wheelchair users and the young.

“Not all athletes are born with an impairment, some are the result of accidents. Therefore, in general, the disabled athletes have later careers. We must give them time to accept their disability, to discover their sport and to adapt their practice according to their disability.”

Looking to the future, it is likely more youngsters will be taking to the slopes, competing in IPC competitions and challenging Bochet for gold.

In 2014, the first IPC European Para Snow Sport Youth Circuit - which was organised with funding from the European Union, Atos and the Foundation for Global Sports Development - came to a conclusion.

Over 12 months, around 50 youngsters from five countries took part in a series of three-day camps which aimed to improve the skills of attendees and give them further education about life as an athlete.

The final day of each camp saw youngsters take part in a competition, giving them all an experience of top flight racing.

Bochet admits she would not be surprised if some of the youngsters were lining up against her at the PyeongChang 2018 Paralympic Winter Games.

“Four years may seem a long way away, but in truth it goes very fast.

“We are already at the beginning of a new season and the Games seem so far away, but the level increases every year and places are becoming more competitive.

“But why not find new young talent on the circuit until 2018. They can find their place and earn their spot at the Games. Only time will tell if they make it!”

Bochet’s next big competition is the 2015 IPC Alpine Skiing World Championships in Panorama, Canada, between 28 February and 10 March, where she will be aiming to retain her five world titles.