After years of campaigning for more TV coverage in the US, NBC showed over 50 hours from the Sochi 2014 Paralympic Winter Games. 30 Dec 2014
Imagen 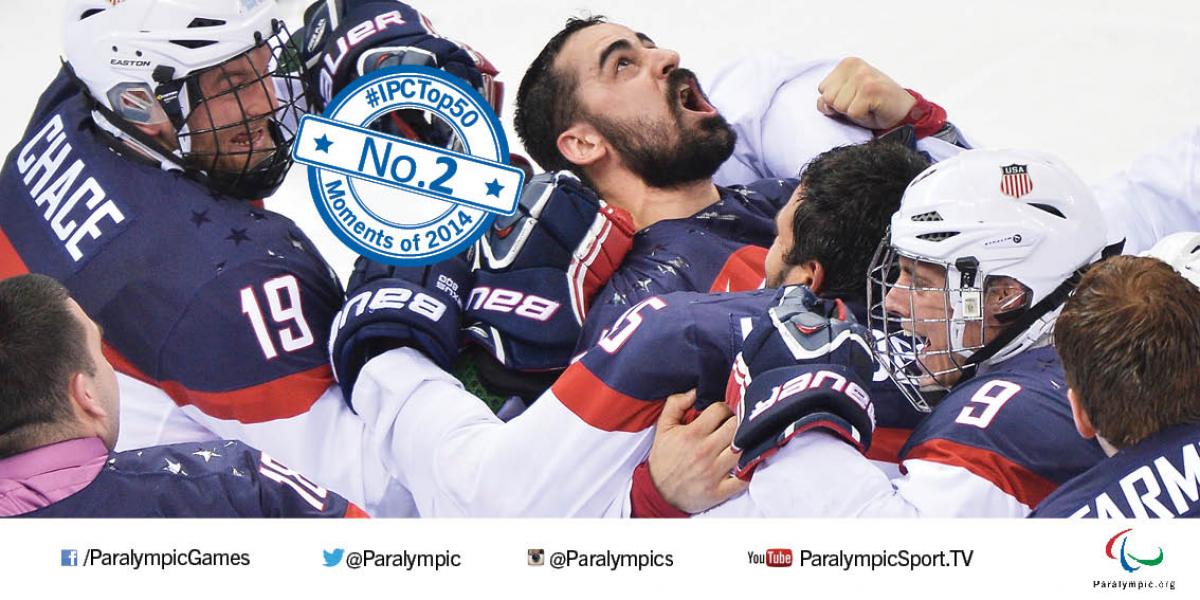 After years of campaigning for more TV coverage in the US, NBC showed over 50 hours from the Sochi 2014 Paralympic Winter Games.

“As soon as the final buzzer went off I was exhausted. I remember turning around and seeing all the guys going crazy in centre ice. It was such a great feeling to represent my country and put USA on top.”

After waiting so long for exposure in the USA, it can be no surprise to anyone that screening the ice sledge hockey gold medal match from Sochi 2014 live on NBC is No. 2 in the IPC Top 50 Moments of 2014.

Saturday 15 March 2014 will go down as one the most important days in Paralympic broadcasting history. NBC, the giant US TV network, cleared their schedules to show live the USA Russia ice sledge hockey gold medal match from the Sochi 2014 Paralympic Winter Games.

It was the first time a US gold medal win was covered live on US TV, changed the lives of many of the players involved and gave the American public a taste of just how exciting and engaging Paralympic sport can be.

Having lost to Russia 2:1 in the group stages, the stakes were high leading in to the final, especially with a capacity crowd in the Shayba Arena all desperate to see the home nation win gold.

“The final was a little intimidating, especially as there were thousands of fans for Russia and just a small group of maybe 50 people supporting the USA,” explained US player Josh Sweeney, a former able-bodied high school ice hockey player who was drawn to sledge hockey while in rehab for an injury he received while serving in the U.S. Marine Corps in Afghanistan.

“We knew the game was going to be aired on NBC, but we did not realise that it would be shown on the primary NBC channel and be aired across the whole of the United States in homes, bars and restaurants.

“We were fortunate by the fact that it was not until the game was over when social media was going crazy that we realised that everyone had been watching the game back home.”

The gold medal game was an extremely close and hard fought affair which was decided by a breakaway goal four minutes into the second period. It was scored by Sweeney and was a goal that has changed his life forever.

“I remember it been a really intense and fast game that took forever to finish. By scoring the goal it was awesome to put my team up on the board at what I thought was a crucial time in the game. I thought someone else would score after my goal, so I wasn’t expecting mine to be the only goal.

“As soon as the final buzzer went off I was exhausted. I remember turning around and seeing all the guys going crazy in centre ice. It was such a great feeling to represent my country and put USA on top.”

Following the goal, Sweeney’s name trended globally on Twitter. The feat was repeated again in July when he received the inaugural Pat Tilmann Award for Service.

“It wasn’t something I was expecting,” said Sweeny of the award which was created by ESPN and the Pat Tillman Foundation in honour of former NFL player and U.S. Army Ranger Pat Tillman to recognise an individual with a strong connection to sports who has served others in a way that echoes the Tillman legacy.

“It was pretty amazing. I had heard about Pat Tillman so to have my name anywhere near his was a huge honour. The standing ovation from big name people in the crowd was amazing.”

Nine months on from winning gold in Sochi, Sweeney believes showing the game live on NBC has had a huge impact for raising awareness of the sport.

“Previously whenever we travelled to Canada, if you mentioned you were a sled hockey player people knew what you were talking about. In the United States they didn’t know; they’d ask questions like ‘can you use your wheelchair on the ice?’ and such like. They had no idea what it was.

“Having it aired on NBC now means that nine times out of 10 if I say I play sled hockey they know what I’m talking about and you can see the excitement in their face. People are excited to see it again which is just awesome for the sport.”

The US public will not have to wait long for their next fix of ice sledge hockey with Buffalo, USA staging the 2015 IPC Ice Sledge Hockey World Championships in April. It is an event Sweeny and his teammates will be looking to add the world title to their Paralympic gold.