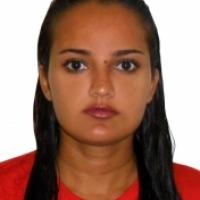 When and where did you begin this sport?
She got involved in Para athletics in 2008.
Why this sport?
Her friend Jenifer Martins encouraged her to try the sport.
Club / Team
Associacao de Apoio A Pessoa Portadora de Deficiencia [AAPPD]: Brazil
Name of coach
Abraao Joaquim Do Nascimento Irmao [personal], BRA

Impairment
She has a congenital malformation to her lower left arm. (cpb.org.br, 01 Sep 2019)
Other information
FRESH START
There was 11 years between the first time she represented Brazil at a major international tournament and the second. She made her championship debut at the 2008 Paralympic Games in Beijing, and had to wait until the 2019 Parapan American Games in Lima, Peru, before she was named in the national team for a second time. "It's never too late to have a fresh start. I gave up a lot and heard a lot of criticism, but that only strengthened my character." (Facebook profile, 16 Jul 2019)