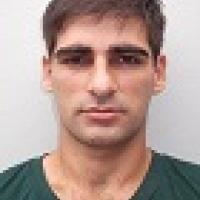 When and where did you begin this sport?
He began competing in high jump in 2009.
Why this sport?
He took up high jump through his wife, who encouraged him after seeing him jump over obstacles around the house every day. He also prefered individual sports.
Club / Team
Associacao Desportiva para Pessoas com Deficiencia Fisica: Brazil
Name of coach
Sidney Reinhold [club], BRA

He sustained a foot injury at the 2016 Paralympic Games in Rio de Janeiro that affected his performance. He finished ninth in the T42 high jump. (cpb.org.br, 10 Mar 2018; guiaparanasudoeste.com.br, 17 Feb 2018)
Sporting philosophy / motto
"Every effort and dedication will be rewarded." (Instagram profile, 22 Jul 2019)
Awards and honours
In 2018 he was named Best Male Para Athlete in Santa Catarina, Brazil, at the Gustavo Kuerten Trophy Gala. (tenisbrasil.uol.com.br, 27 Nov 2018; itajai.sc.gov.br, 27 Nov 2018)
Ambitions
To compete at the 2020 Paralympic Games in Tokyo. (guiaparanasudoeste.com.br, 17 Feb 2018)
Impairment
At age 16 his leg was amputated after a tumour was found on his femur [thigh bone]. (jornaldebeltrao.com.br, 06 Jul 2012)
Other information
FILM
He played a fictionalised version of himself in the short film 'Protesys', which was released in 2020. (omegascopio.com.br, 31 Aug 2020; g1.globo.com, 30 Aug 2020)