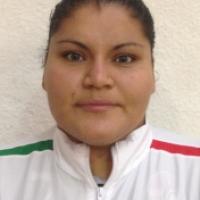 When and where did you begin this sport?
She took up Para sports at age 15 in Puerto Vallarta, Mexico.
Why this sport?
She tried different sports, including wheelchair basketball, before becoming interested in throwing events in athletics.
Name of coach
Ivan Rodriguez Luna [national], MEX
Training Regime
She has two sessions a day at the Mexican Paralympic Training Centre [CEPAMEX] in Mexico City, Mexico.

Nicknames
Floresita (deporte.org.mx, 04 Jun 2007)
Memorable sporting achievement
Finishing fifth in the F57 discus at the 2016 Paralympic Games in Rio de Janeiro. (Athlete, 15 Jul 2017)
Injuries
She has undergone shoulder surgery twice during her career. (Facebook profile, 11 Dec 2020)
Superstitions / Rituals / Beliefs
She kisses her competition discus after she has chosen it. (Capital 21 YouTube channel, 01 Aug 2017)
Sporting philosophy / motto
"Do not quit fighting just because you fear losing." (RNo TeRajes YouTube channel, 05 Aug 2016)
Awards and honours
She received a Sports Merit Award in the Para sports category in Puerto Vallarta, Mexico, in recognition of her performances in 2017. (paraleloinformativo.com, 18 Dec 2017; vallartaindependiente.com, 09 Dec 2017)
Other sports
She represented Mexico in wheelchair basketball at the Paralympic Games in 2008 and 2012. (SportsDeskOnline, 12 Mar 2013)
Ambitions
To compete at the 2020 Paralympic Games in Tokyo. (gob.mx, 19 Jun 2019)
Impairment
Her legs were amputated after she was hit by a truck at age six. (Athlete, 15 Jul 2017)
Other information
FROM BASKETBALL TO ATHLETICS
She represented Mexico in both wheelchair basketball and athletics at the 2008 Paralympic Games in Beijing. She had hoped to compete in wheelchair basketball at the 2016 Paralympic Games in Rio de Janeiro, but the national team failed to qualify and she began to train solely in Para athletics in September 2015. "It was the first time the national team did not qualify for the Games, so I decided to take a rest and focus on an individual sport." (SportsDeskOnline, 23 Aug 2016; estoenlinea.oem.com.mx, 13 Dec 2015; deporte.org.mx, 03 Sep 2008)