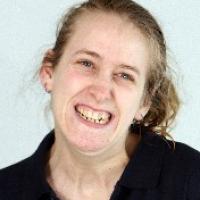 When and where did you begin this sport?
She began competitive swimming at secondary school in England, after having been terrified of the water for most of primary school.
Why this sport?
After her first experience of competition she did not want to stop.
Club / Team
Colchester Phoenix: Colchester, ENG
Name of coach
Ed Williams
Coach from which country?
Great Britain
Coach from what year?
2001

Memorable sporting achievement
Swimming through the pain of a shoulder injury to take the silver medal in the 50m backstroke at the 2008 Paralympic Games in Beijing. (fran-williamson.co.uk, 04 Feb 2010)
Most influential person in career
Her mother. (britishswimming.org, 04 Feb 2010)
Injuries
She has suffered from a nagging right shoulder injury for much of her career. The injury hampered her greatly in the lead-up to the 2008 Paralympic Games in Beijing and forced her to miss most of the 2009 season. (fran-williamson.co.uk, 04 Feb 2010)

EDUCATION
She studied for a masters degree in disability studies at Leeds University. (NPC Media Guide 2010)