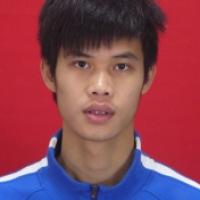 When and where did you begin this sport?
He took up Para athletics in 2006 in Jiangmen, People's Republic of China.
Why this sport?
His talent was identified by coach Zeng Huawei, who watched him perform at a long jump competition. Before taking up Para athletics, he had been involved in cycling, shooting and badminton.
Club / Team
Guangdong Province [CHN] / Jiangmen [CHN]:
Name of coach
Zeng Huawei [Guangdong], CHN

In 2012 he was presented with the May 4th Youth Medal and a Merit Citation Class One by the Guangdong provincial government in the People's Republic of China. (kp.com.cn, 15 Feb 2014)