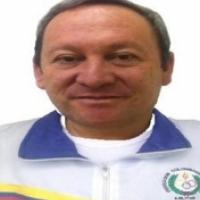 When and where did you begin this sport?
He competed in sport shooting during his time in the military, and got involved in shooting Para sport after he lost his leg in 2001.
Why this sport?
After his injury he fell into depression and alcoholism. But his rehabilitation physiotherapist encouraged him to try sports, which included tennis, cycling, swimming, diving, and running. He also gave shooting a go, and with his military experience he found he had a talent for the sport. "When I was a cadet in the military school I was a member of the shooting sport team, but I put it aside and continued with my military career. One day, after running my fifth marathon after the attack a friend saw a photo of me on the internet and asked me what I was doing running marathons without a leg and while I was very good at shooting. So I went to the shooting company and Sergeant Monroy reintroduced me to the sport."
Club / Team
Bogota District: Colombia

Hobbies
Climbing mountains. (cpc.org.co, 19 Nov 2019)
Sporting philosophy / motto
"Everything can be achieved, no matter age or impairment. The main thing is discipline and patience." (cpc.org.co, 19 Nov 2019)
Impairment
He was an expert in explosives and engineering in the Colombian Army. He lost his leg in late 2001 as a result of a terrorist bombing at a military base in Arauca, Colombia. (ejercito.mil.co, 25 Jul 2005; usergioarboleda.edu.co, 23 May 2011)
Other information
MOUNTAIN CLIMBING
He has led groups of people with impairments in climbing a number of the world's highest mountains, including Mount Everest, Mount Kilimanjaro, and Aconcagua. "You believe you are big, and then you stand in front of a mountain and realise how small you are. But at the same time, being there, reaching the top, makes you feel the biggest you can possibly be against adversities. It's an act of nobility." (cpc.org.co, 19 Nov 2019; paranacionales.gov.co, 02 Dec 2019; las2orillas.co, 07 Apr 2016; mevocumbreenproducci.wixsite.com, 2015; elespectador.com, 19 Jul 2012)