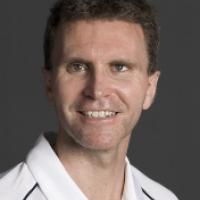 He was named the 1995 Young Queenslander of the Year. (crescentofbrisbane.org, 29 Dec 2009)
Other sports
He represented Australia in goalball at the 1996 Paralympic Games in Atlanta. He has also competed in para-cycling at national level. (paralympic.org.au, 29 Dec 2009; qld.cycling.org.au, 28 Aug 2016)
Other information
BUSINESS OWNER
He is the owner and manager of Chocolate Moments/Chocolate Magic, which retails and manufactures gourmet handmade chocolates in Brisbane, QLD, Australia. (Facebook profile, 23 Jul 2016; businessnewsaus.com.au, 02 Apr 2015)

COMMUNITY WORK
To raise money for charity he has organised sponsored glider flights and also ran from Cairns to Brisbane in QLD, Australia, which is a total distance of over 2000 kilometres. He has worked as a special projects manager for Vision Australia, a non-profit organisation that provides services for the visually impaired. (isaac.qld.gov.au, 10 Jan 2013; crescentofbrisbane.org, 29 Dec 2009; visionaustralia.org, 29 Dec 2009)

TELEVISION APPEARANCE
In 2009 he became the first visually impaired contestant to appear on the Australian television programme 'Dancing With the Stars', a show where celebrities are paired with dance professionals and perform routines in front of an audience. (businessnewsaus.com.au, 02 Apr 2015; visionaustralia.org, 29 Dec 2009)