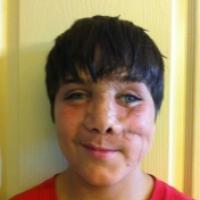 Hobbies
Wrestling. (wgno.com, 22 Feb 2017)
Impairment
In 2008 his vision became impaired after a firework exploded in his face. He lost use of both eyes and the impact also knocked out several teeth and exposed his sinus cavities. The family were igniting fireworks in memory of his mother who died of cancer three years earlier. (wgno.com, 22 Feb 2017; theadvocate.com, 30 Jan 2017)