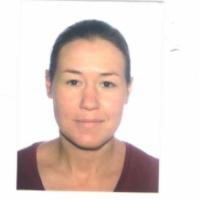 When and where did you begin this sport?
She took up Para athletics in December 2016 in Kapellen, Belgium. In 2018 she began practising long jump.
Why this sport?
Before the amputation of her leg, she enquired at the KAPE athletics club about training as a wheelchair athlete. A Belgian mobility group called Move All The Way lent her a handcycle until a number of charitable organisations helped her to buy one of her own. "I like a lot of sports. After my amputation I wanted to run again."
Club / Team
KAA Gent: Belgium
Name of coach
Mieke van Thuyne, BEL

Hobbies
Boxing. (Athlete, 06 Nov 2019)
Memorable sporting achievement
Winning silver in the T63 long jump and bronze in the T63 100m at the 2018 European Championships in Berlin, Germany. (zizomag.be, 26 Aug 2019)
Most influential person in career
Coach Mieke Van Thuyne. (Athlete, 06 Nov 2019)
Hero / Idol
Belgian wheelchair racer Peter Genyn, Belgian heptathlete Nafissatou Thiam, Belgian boxer Delfine Persoon. (Athlete, 19 Aug 2018)
Sporting philosophy / motto
"When life punches, punch back harder." (Athlete, 16 Jul 2017)
Other sports
She competed in Para triathlon at the 2017 World Championships in Rotterdam, Netherlands. Prior to her accident, she was a semi-professional Muay Thai boxer and represented Belgium at the European championships. (SportsDeskOnline, 30 Jul 2018; gitteonwheels.simplesite.com, 27 Aug 2016)
Ambitions
To win a medal at the 2020 Paralympic Games in Tokyo. (hln.be, 28 Dec 2020)
Impairment
She was involved in Muay Thai boxing at an elite level when in 2010 she was accidentally kicked in her left knee at training, which tore her anterior cruciate ligament [ACL]. She had a series of operations and returned to the sport, but by 2014 her knee had deteriorated and she had chronic pain syndrome, as well as nerve damage in her leg. She was forced to stop boxing and her left leg was amputated above the knee in March 2016. "It was the best decision. I have more freedom and a purpose again. I can live again. After that amputation I could start my new life and I could set new goals. I have not regretted that decision for a second." (sporza.be, 27 Jan 2021, 27 Aug 2018; Athlete, 06 Nov 2019; gitteonwheels.simplesite.com, 27 Aug 2016; nieuwsblad.be, 07 Apr 2015)
Other information
OTHER ACTIVITIES
She is part of the Game Changers group, which is organised by the Belgian Olympic and Interfederal Committee [COIB] to promote gender equality and empower women in sports. "I can make a comparison between able-bodied and Paralympic athletes. I have the impression that in the latter category there is more gender equality. Through interviews with athletes, former athletes, board members, officials and coaches, and by encouraging girls and women to participate in sports through activities in schools and sports clubs, we hope to make girls enthusiastic about sport." (teambelgium.be, 12 Oct 2020; thebulletin.be, 12 Oct 2020; sportvisie.be, 06 Oct 2020)