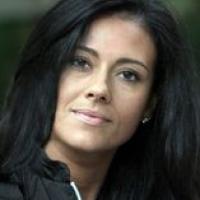 When and where did you begin this sport?
She took up para-athletics in 2010.
Why this sport?
She began running simply to see if she was able to do so, as some people had told her it was not possible.
Club / Team
Fiamme Azurre: Italy
Name of coach
Michele Gionfriddo [national]; Andrea Giannini [personal]

Nicknames
Giusy (paralympic.org, 07 Oct 2015)
Most influential person in career
Coach Andrea Giannini. (iodonna.it, 19 Aug 2015)
Injuries
She had her thyroid gland removed in June 2012. (ntacalabria.it, 06 Aug 2012)
Sporting philosophy / motto
"Start by doing what is necessary, then what is possible, and suddenly you are doing the impossible." [Saint Francis of Assisi] (Twitter profile, 01 Feb 2016)
Famous relatives
She is related to fashion designers Gianni, Donatella and Santo Versace through her father. (ilsussidiario.net, 06 Dec 2014)
Impairment
She had both legs amputated below the knee as the result of injuries sustained in a car accident in 2005. (carnevale.venezia.it, 05 Feb 2015)
Other information
OCCUPATION
In 2015 she began co-presenting the Italian sports show La Domenica Sportiva [The Sunday Sport] alongside Italian journalist Alessandro Antinelli. (iodonna.it, 19 Aug 2015; ilgiornale.it, 22 Feb 2016)

TV APPEARANCE
She was the winner of the 2014 edition of the Italian television programme Dancing with the Stars [Ballando con le Stelle]. She was the first winner with an impairment in the history of all the international editions of the show. Her partner for the programme was Italian dancer Raimondo Todaro. (paralympic.org, 07 Oct 2015; nuovavenezia.gelocal.it, 05 Feb 2015)

LONDON 2012 DISAPPOINTMENT
She was not selected for the national squad ahead of the 2012 Paralympic Games after the Italian Paralympic Committee elected not to take her. The decision came even though she had achieved the qualifying times for the 100m and 200m. "It leaves a bad taste in my mouth," Versace said. (vita.it, 07 Aug 2012, ntacalabria.it, 30 Aug 2012)

CHARITY WORK
In 2011 she founded the non-government organisation Disability No Limits, which gives support to sports clubs so that children can try different sports. She has also served as an ambassador for Save the Dream, a project created by the Qatar Olympic Committee which aims to promote sport among young people. (iodonna.it, 19 Aug 2015; paralympic.org, 07 Oct 2015)