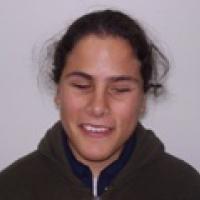 When and where did you begin this sport?
She took up athletics at age 15, and in 2014 she began para-rowing.
Why this sport?
She found in sports a way to overcome her impairment.
Club / Team
Asociacion Cordobesa de Remo [para-rowing]: Córdoba, ARG
Name of coach
Valeria Haro [para-rowing]
Training Regime
She trains at the High Performance Centre [CeNARD] in Buenos Aires, Argentina.