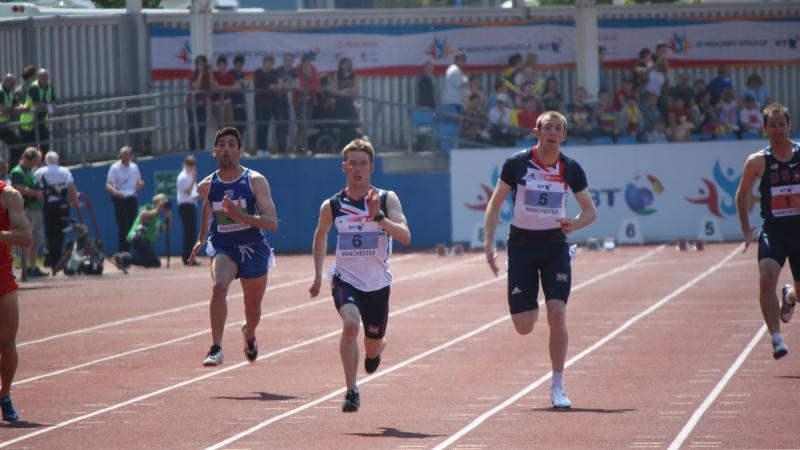 When and where did you begin this sport?
He took up athletics at age 20 in Chorley, England.
Why this sport?
He wanted to stay fit.
Club / Team
Chorley Athletic and Triathlon Club [ENG] / Wigan and District Harriers and Athletics Club [ENG]:
Name of coach
Trevor Painter [personal], GBR

Nicknames
G Unit, Bullet (Facebook profile, 16 Apr 2016; rio.paralympics.org.uk, 09 Aug 2016)
Most influential person in career
His coach, and his mother. (Athlete, 09 Dec 2010)
Injuries
He was affected by a back injury at the 2008 Paralympic Games in Beijing and for most of 2009. (paralympic.org, 23 Mar 2013; morethanthegames.co.uk, 30 Nov 2009)
Sporting philosophy / motto
"Winners never quit and quitters never win." (Athlete, 09 Dec 2010)
Awards and honours
He received a special performance award in 2014 from the Chorley Athletic and Triathlon Club in England. (chorley-athletic-and-triathlon.org, 11 Dec 2014)

He was named the 2005 Cerebral Palsy [CP] Sport Athlete of the Year. (paralympics.org.uk, 14 Jan 2010
Other sports
He has represented the England cerebral palsy football team, and competed at national level in Para swimming. (haydockhigh.org.uk, 12 Oct 2013)
Impairment
He has cerebral palsy. The condition affects all four of his limbs. (ljmu.ac.uk, 16 May 2014)
Other information
OTHER ACTIVITIES
He has served as an ambassador for Cerebral Palsy Sport in Great Britain. The charity aims to help people with cerebral palsy reach their sporting potential. (cpsport.org, 03 Oct 2017)