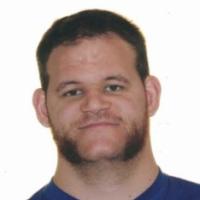 When and where did you begin this sport?
He began training in shot put in September 2017.
Why this sport?
He was already a sportsperson, having competed in basketball and volleyball, but had a chance meeting with a wheelchair sports coach at a Christmas party in 2016. The coach encouraged him to attend a development camp for Para sports, where he began training in throwing. "After ending my volleyball and basketball careers, I found the longer I was away from sport, the more I missed it. I always had a spidey sense that I was meant to get back into sport. Then one day I ran into a wheelchair athletics coach and we got chatting. He had asked if I ever thought about athletics, specifically, shot put. Being from Kamloops and knowing it was the National Throw Center at one point, I said, 'Ya, I've thought about it'."
Club / Team
Kamloops Track and Field Club: Canada
Name of coach
Dylan Armstrong [club], CAN

Memorable sporting achievement
Winning a silver medal at the 2019 Parapan American Games in Lima, Peru. (infotel.ca, 10 Sep 2019)
Injuries
The day before leaving for the 2019 Parapan American Games in Lima, Peru, he pulled his back while lifting. He was left with reduced mobility and considerable pain. He still competed, and won a silver medal. (cfjctoday.com, 20 Dec 2019; infotel.ca, 10 Sep 2019)
Sporting philosophy / motto
"Trust in the process." (csipacific.ca, 01 Jan 2020)
Awards and honours
He was awarded the International Excellence Award by the Kamloops Sports Council at the 2019 Kamloops Sports Awards in Canada. (LinkedIn profile, 01 Jul 2020; gowolfpack.ca, 29 Jul 2019)

During his university basketball career he was named the Canada West Defensive Player of the Year in 2010 and 2011, and the 2011 Canadian Interuniversity Sport [CIS] Defensive Player of the Year. (athletics.inside.tru.ca, 04 Mar 2011; paralympic.ca, 2011)
Other sports
He was part of the Canadian national sitting volleyball teams that won bronze at the Parapan American Games in 2007 and 2011. He also won three world titles with the Canadian national Para standing volleyball team, and played basketball for Thompson Rivers University in Kamloops, BC, Canada. (paralympic.ca, 2011)
Ambitions
To compete at the 2020 Paralympic Games in Tokyo. (csipacific.ca, 01 Jan 2020)
Impairment
He was born without the lower part of his left arm. (paralympic.ca, 2011)
Other information
ADAPTING TO ATHLETICS
He says that taking part in different sports like volleyball and basketball before he switched to Para athletics was significant in his personal development. "It's taught me how to become adaptive to your environment, how to work in a team, how to communicate effectively and efficiently, and has shown me that there is so much joy in everything we do. The transition [to athletics] at first was extremely challenging. What do you mean I need to book my own flight, find my own accommodations and register for the meet? All the years I was doing team sports, we had a manager, team assistants, coaches, administration, etc. We kind of just showed up, competed, then went home. Not only that, if I was having a poor day in competition, I could be subbed out, or have another player take the reins. The independence between the two [team sports and athletics] has been the major difference. If I have an off day or competition, it's all on me. There's no one to sub me out." (csipacific.ca, 01 Jan 2020)

PARALYMPIC DREAM
A two-time bronze medal winner in volleyball at the Parapan American Games, he never made a Paralympic Games with the Canadian volleyball teams. He says the opportunity to compete at the Paralympic Games in shot put is a strong source of motivation. "I'm definitely more committed than ever before. [It would] mean almost everything just to represent myself. And I'd be extremely grateful to represent the country. We as Canadians, we are good people. To represent a country that is loving, caring and connected, I'm very humbled by it." (burnabynow.com, 25 Jun 2018)

A BETTER LIFE
He says re-settling in Kamloops, BC, Canada, and with the help of his brother, who works in self-improvement, he has found a "better life" than before. Before moving back to Kamloops he competed in basketball and volleyball, moving from various cities and jobs in the process. "[I've found] a better life. I've done a lot of mental work, spent a lot of time on graphic integration. I do a lot with feelings and love and self. It's probably one of the biggest reasons I'm where I'm at. My connection to self, to love, it's changed my whole perspective in life." (burnabynow.com, 25 Jun 2018)