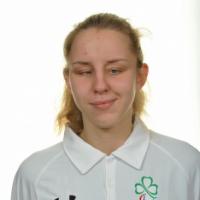 When and where did you begin this sport?
She began running at age 17 at Rosmini Community School in Drumcondra, Ireland.
Why this sport?
Her physical education teacher Sean Gallagher encouraged her to try Para athletics at school. "I was doing physical education classes with able-bodied students. One day, my teacher asked me to compete in an 800m race and I came second. That was the beginning."
Club / Team
Clonliffe Harriers AC [IRL] / Dublin Track Club [IRL]:
Name of coach
Feidhlim Kell; Eamonn Flanagan [strength and conditioning]
Training Regime
She runs up to 65 kilometres a week over six days at Dublin Track Club in Ireland.

"Put in the work and be patient." (Athlete, 19 Aug 2021)
Ambitions
To compete at the 2020 Paralympic Games in Tokyo. (paralympics.ie, 18 Sep 2020)
Impairment
She has a vision impairment as the result of being born prematurely. She sustained damage to her retina after she was placed in an incubator. Although she was diagnosed as fully blind, her parents sought a second opinion in Sweden and further surgery returned partial sight to her left eye. (her.ie, 01 Feb 2019; irishtimes.com, 03 May 2016)
Other information
FROM LITHUANIA TO IRELAND
Born in Vilnius, Lithuania, she moved to Ireland at age 15 to live with her father, who had relocated to the country in 2006 for work. She gained Irish citizenship in 2016. "I'm proud to be Lithuanian and the passport doesn't really change that. At the same time, I love Ireland. I started running when I was in Ireland. People support me, people coach me, people are there for me in Ireland. I wanted to run for Ireland. Even now, I'm probably going to live the rest of my life here." (hersport.ie, 28 Jul 2020; upcoming.ie, 11 Jul 2019; irishtimes.com, 03 May 2016)

DOCUMENTARY
In July 2017 a documentary about her life titled 'Greta' premiered at the Galway Film Fleadh in Ireland. The film follows her life from being born in Lithuania, up to her preparations with Ireland ahead of the 2017 World Championships. (independent.ie, 08 Jul 2017)

OTHER ACTIVITIES
In 2019 she was named an ambassador for the 'Dare to Believe' campaign organised by the Olympic Federation of Ireland [OFI]. The aim of the scheme is to promote the wider values of sport to children across Ireland. "I always say if one child takes something out of it, it's already a win." (hersport.ie, 28 Jul 2020; upcoming.ie, 11 Jul 2019; daretobelieve.ie, 01 Jan 2019)

FURTHER EDUCATION
She has studied for a master's degree in business management at Dublin City University [DCU] Business School in Ireland. (upcoming.ie, 11 Jul 2019)