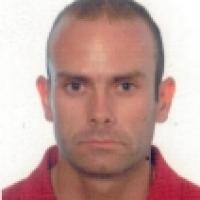 When and where did you begin this sport?
He took up able-bodied cycling at age 13 and began competing at junior club level in 1997. In 2001 he began a career as a tandem rider for visually impaired cyclists. He took up athletics in 2006.
Why this sport?
Prior to his accident, he had spent 15 years competing in professional cycling. He wanted to continue practising sports after the accident.
Club / Team
Villanueva de los Infantes: Spain
Name of coach
Santi Sanz [personal]

Awards and honours
He was named 2015 Athlete of the Year at the 2016 Provincial Sports Gala in Ciudad Real, Spain. (dipucr.es, 14 Apr 2016)
Other sports
He competed in the H1 cycling category at the 2017 Triathlon National Championships in Valencia, Spain. (triathlon.org, 10 Sep 2017)
Impairment
His impairment is a result of an abseiling training accident at a bridge over the Tagus River in Toledo, Spain. (dxtadaptado.com, 17 Oct 2016)