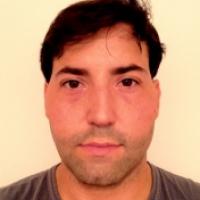 When and where did you begin this sport?
He took up the sport at age three, and began competing at age 10.
Why this sport?
His doctor recommended the sport to his parents.
Club / Team
Club Atletico River Plate: Buenos Aires, ARG

He was flag bearer for Argentina at the opening ceremony of the 2012 Paralympic Games in London. (paralympic.org, 29 Aug 2012)
Ambitions
To compete at the 2020 Paralympic Games in Tokyo. (unidiversidad.com.ar, 19 Sep 2017)
Impairment
He has congenital arthrogryposis with misalignment of the hip. The condition only affects his lower body and gives him limited movement in the joints of his legs. (sitioriverplatense.com.au, 30 Sep 2009; diariobuenosaires.com.ar, 10 Sep 2008)
Other information
CHANNEL CROSSING
In July 2014 he successfully swam across the English Channel, becoming the first Argentinian swimmer with an impairment to do so. (diamantesbrutos.com.ar, 04 Jul 2014)