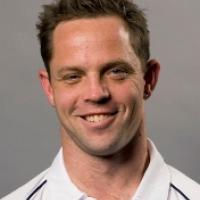 When and where did you begin this sport?
He first competed in 1992.

In 1997 he was awarded the Medal of the Order of Australia for services to sport as a gold medallist at the 1996 Paralympic Games in Atlanta. (itsanhonour.gov.au, 05 Jan 2010)

He was named 1996 Northern Territory Sportsman of the Year. (athletics.com.au, 05 Jan 2010)
Other information
RETIREMENT
He announced his retirement from sport in February 2013. (insidethegames.biz, 02 Feb 2013)

COMMUNITY WORK
Outside of competing he works hard to educate people about impaired sports and has travelled to several islands in the Caribbean and South Pacific to implement sports programmes for athletes with an impairment. He has also been a member of the International Paralympic Committee [IPC] Athlete Commission and has been involved with the United Nations High Commission for Refugees since 1998, travelling to refugee camps on the Thai-Cambodian border. He represented the World Anti-Doping Authority at the 2003 South Pacific Games as an athlete ambassador to help raise awareness of drugs in sport. (paralympic.org.au, 05 Jan 2010)