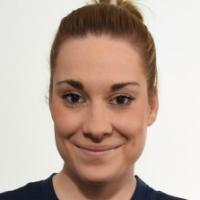 When and where did you begin this sport?
She began swimming at age two.

Most influential person in career
Her mother. (British Swimming Media Guide, 10 Jul 2011)
Hero / Idol
British athlete Jane Tomlinson, and British cyclist Chris Hoy. (swimming.org, 2013)
Injuries
She spent 40 hours in intensive care in May 2012 after complaining of feeling unwell. Doctors were unable to tell her exactly what was wrong with her. She also had a broken hand during this period. (elmsdirect.com, 30 Nov 2012)
Superstitions / Rituals / Beliefs
She likes to wear a hooded jacket until just before she competes. (channel4.com, 15 Aug 2012)
Sporting philosophy / motto
"Train hard and the results will follow." (guardian.co.uk, 08 Sep 2012)
Other sports
She has also competed in able-bodied swimming competitions. (peterboroughtoday.co.uk, 07 Mar 2013)
Ambitions
To compete at the 2020 Paralympic Games in Tokyo. (cambridge-news.co.uk, 15 Nov 2016)
Impairment
She has a growth condition called Beckwith-Wiedemann syndrome, diagnosed in 2009. (chroniclelive.co.uk, 31 Mar 2015; cambridge-news.co.uk, 23 May 2013)
Other information
SWIM TEACHER
In 2017 she organised and ran the Harriet Lee Swim Clinic at Trinity Arts and Leisure Centre in Bedford, England. (Facebook page, 27 May 2018)

OTHER ACTIVITIES
She is an ambassador for Vision Express, which involves coaching children and teaching the importance of eye healthcare. (visionexpress.com, 04 May 2015)