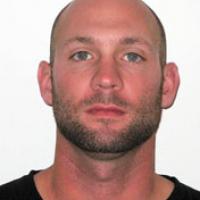 When and where did you begin this sport?
He took up the sport in 2004 at the Disabled American Veterans winter sports clinic in Aspen, CO, United States.
Why this sport?
"When I'd been in the hospital for five months, the Disabled American Veterans held a winter sports clinic so I attended. I'd skied a few times in high school, but nothing major. At the clinic, they taught me how to use a mono-ski. Skiing was the first thing that gave me my legs back. I could use the same ski lift as everybody else. The only limitation on which slope I went down was my skill level. I didn't develop much proficiency that weekend, but I had a blast."
Club / Team
Aspen Valley Ski and Snowboard Club [AVSC]: United States
Name of coach
Jonathan Mika [club]; Kevin Jardine [national], USA

He was the flag bearer at the opening ceremony of the 2010 Paralympic Winter Games in Vancouver. (thehandiesstone.typrepard.com, 15 Mar 2010)

After the 2010 Paralympic Winter Games he had a NASCAR Sprint Cup Series race named in his honour, for his determination and ability to inspire others to live their lives to the fullest despite serious injury. The race was called 'Crown Royal presents the Heath Calhoun 400'. (nascar.com, 20 Oct 2010)
Impairment
In November 2003, while serving in the US Army's 101st Airborne Division, he was in a Humvee in Iraq when his convoy was attacked. A rocket-propelled grenade destroyed the vehicle, killed a fellow soldier, and damaged Calhoun's legs so badly they both had to be amputated above the knee. (lowerextremityreview.com, Apr 2010)
Other information
OTHER ACTIVITIES
He is a spokesperson for the Wounded Warrior Project and for Hanger Prosthetics and Orthotics in the United States. He also works as a peer counsellor for the Amputee Coalition of America. (theleafchronicle.com, 07 Oct 2014)

SKI INSTRUCTOR
He is a certified mono-ski instructor and teaches as part of the Challenge Aspen programme in Snowmass, CO, United States. (bleacherreport.com, 18 Feb 2014)

SOLDIER'S ADVOCATE
After he completed nine months of rehabilitation at the Walter Reed Medical Center and learned to walk on computer-controlled prosthetic legs, he had to retire from the US Army due to his injuries. Since then he has become a passionate advocate and spokesperson for soldiers with amputations. (liftalifefoundation.org, 20 Mar 2012)

SILVER-SCREEN INSPIRATION
A short film, called 'The Fall Line', was made in 2010 detailing his injury and his fight to win a medal at the 2010 Paralympic Winter Games in Vancouver. (banffcentre.ca, 13 Dec 2010)