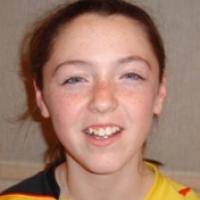 When and where did you begin this sport?
She took up athletics at age 11.
Club / Team
Cushinstown Athletic Club: Ireland
Name of coach
James Nolan [national], IRL

Sporting philosophy / motto
"Never give up." (herald.ie, 28 Mar 2013)
Awards and honours
She received the Girls International Athlete Award at the 2013 Meath Annual Awards Night in Navan, Ireland. (independent.ie, 11 Dec 2013)
Impairment
She was born with cerebral palsy. (setanta.com, 21 Aug 2012)
Other information
YOUNGEST
At age 15 she was the youngest member of the Ireland team at the 2012 Paralympic Games in London. (setanta.com, 21 Aug 2012)