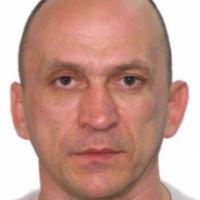 When and where did you begin this sport?
He swam as a child and began Para swimming in 2010 in Mykolayiv, Ukraine.
Why this sport?
"I did not want to stay sitting at home, I tried to live actively." He trained in fencing and basketball, but once he tried swimming, he decided to stay with it.
Club / Team
Invasport: Mykolayiv, UKR
Name of coach
Mykola Ilin, UKR; Tatiana Ilina, UKR

He won the Strength of Spirit award at the 2016 Sports Awards event of the Mykolayiv region of Ukraine. (news.pn, 27 Dec 2016)
Impairment
His impairment is the result of an accident in 1999, in which he fell on the street, fracturing his neck and dislocating a femur. (novosti-n.mk.ua, 27 Sep 2012; pravda.com.ua, 18 Sep 2016)
Other information
TOUGH TIMES
After the accident that resulted in his impairment, he could not afford surgery, so he sold his apartment and lived in a tent, untreated, for 10 years. In 2009 enough funds were available for him to have an operation on his right hip. (pravda,com.ua, 18 Sep 2016; niklife.com.ua, 26 Sep 2012)