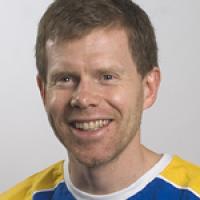 Other sports
He has represented Sweden at para-cycling road world cup events. (iof1.idrottonline.se, 13 Jun 2012; uci.ch, 24 May 2012)
Impairment
He has retinitis pigmentosa, a congenital condition which means he is gradually losing vision. He is chairman of the Swedish RP Association, an organisation that aims to help research into the condition. (legimus.se, 01 Oct 2012; aftonbladet.se, 31 May 2008; retina-sweden.se, 01 Aug 2012)
Other information
OCCUPATION
He is a director at Nasdaq OMX, a financial services corporation that owns and operates the NASDAQ stock market and European stock exchanges. (LinkedIn profile 12 Dec 2012)

2012 PARALYMPIC DISAPPOINTMENT
In April 2012 he ran in the Rotterdam marathon, beating the qualification time for the 2012 Paralympic Games. The Swedish Paralympic Committee were not notified of his time, so based on his other times, which were slower, they chose not to select him to go to London. (dn.se, 20 Aug 2012)