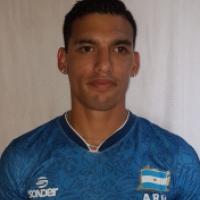 When and where did you begin this sport?
He took up the sport at age 11 in Argentina.
Why this sport?
His physical education teacher Norma Mayol took him to a club to start training. "Life took me to sport, it found me."
Club / Team
Club Union: Zárate, ARG
Name of coach
Ariel Gonzalez, ARG, from 2009

Hobbies
Playing football, spending time with his daughters. (Athlete, 09 Nov 2019)
Memorable sporting achievement
Winning bronze at the 2012 Paralympic Games in London, and two bronze medals at the 2016 Paralympic Games in Rio de Janeiro. (Athlete, 09 Nov 2019)
Most influential person in career
Coach Norma Mayol. (Athlete, 16 Jul 2017)
Hero / Idol
Jamaican sprinter Usain Bolt. (Athlete, 16 Jul 2017)
Injuries
He was troubled by an injury to his right hamstring in the early part of 2016. (lanacion.com.ar, 13 Sep 2016)
Sporting philosophy / motto
"Your only rival is yourself." (Athlete, 16 Jul 2017)
Awards and honours
In 2020 he was named among the 100 Most Outstanding Sportspeople of the Decade in Argentina. (fundacionkonex.org, 23 Nov 2020)

In 2019 he was given the Jorge Newbery Award in the category of sports with cerebral palsy by the sports department of Buenos Aires City Government in Argentina. (Instagram profile, 04 Dec 2019; algopasabuenosaires.com.ar, 03 Dec 2019)
Ambitions
To win a gold or silver medal at the 2020 Paralympic Games in Tokyo. (paradeportes.com, 31 May 2017)
Impairment
He has cerebral palsy due to a lack of oxygen at birth. (Athlete, 09 Nov 2019)
Other information
COACHING AND JOURNALISM
He hopes to work as a coach in the future, and also has an interest in sports journalism. "I really like sports journalism on the radio or television. I've been on television and I've overcome my stage fright so I hope to be able to have a programme dedicated to Para sport one day, which is what I do." (elterritorio.com.ar, 24 Jul 2019; Athlete, 09 Nov 2019)

HOME BURGLARY
Thieves broke into his home while he was competing at the 2019 Parapan American Games in Lima, Peru. His two daughters and their babysitter were in the house at the time. "Three people knocked down the balcony door to enter my house. They were looking for money as if I was rich. It took me eight years to buy that house. They took material things, some valuable objects, broke everything and threatened my daughters. It's sad news for me, you work tirelessly to have your own things. Thank God the girls are okay." (viapais.com.ar, 20 Aug 2019; Facebook profile, 19 Aug 2019)