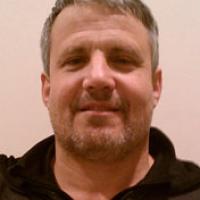 When and where did you begin this sport?
He first skied at age three. He began para-alpine skiing in 1981 at age 19 at the Winter Park ski resort in Colorado, United States.
Why this sport?
"About six months after my injury I heard about adaptive skiing. I tried it, loved it, and then I tried racing and I loved it even more. I've been racing ever since. I would credit skiing, disabled skiing and ski racing to saving my life, because I was pretty depressed [after my accident]. With disabled skiing I am up to speed with everyone else. I can get on a chair lift by myself and ski all day."
Training Regime
He trains at the National Ability Center in Park City, UT, United States.

REPRESENTING TURKEY IN 2014
The son of Turkish parents, he competed in the 2006 Paralympic Winter Games in Turin for the United States. However, he was not selected for the 2010 US Paralympic team. "I was totally miffed at not being able to go and represent the US in 2010. I felt I had the results. I hadn’t seen any disabled skiing coming out of Turkey so I decided that if I am going to work four years to go to the Paralympics it’s going to be for a country that’s never been, and maybe by the same token bring disabled skiing and ski racing to Turkey. I can’t think of a greater honour to be able to do that and take Turkey to the Paralympics in 2014." (teamusa.org, 01 Jan 2010; vimeo.com, 01 Jun 2012; theskichannel.com, 19 Mar 2006)

BUILDING HIS OWN MONOSKIS
After discovering monskis he decided to build his own. He built a monoski with an additional shock absorber for his legs. "When I came up with this my super G points were about 140 World Cup points and after the first two races I completed with this device my points went from 140 to under 100, which qualified me for the World Cup at that point. In fact when I got home from those races they drug-tested me because they couldn’t believe the performance according to the points." (vimeo.com, 01 Jun 2012)