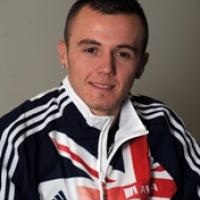 When and where did you begin this sport?
He took up athletics in 2004 when he was still at school.
Why this sport?
He originally competed in able-bodied competitions before he found out the disability in his feet was irreparable and switched to disability sport.
Club / Team
East Cheshire: England
Name of coach
John Dunne
Coach from what year?
2005