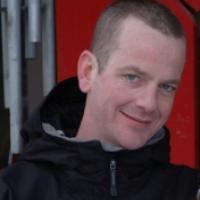 When and where did you begin this sport?
He began snowboarding on Mount Ruapehu, New Zealand, in 1989.
Why this sport?
He liked surfing and says that snowboarding "enabled me to do the tricks I could only dream of as a surfer".
Club / Team
Kootenay Boardriders: Rossland, BC, CAN
Name of coach
Candice Drouin [national]
Coach from which country?
Canada
Preferred position / style / stance / technique
Regular

Nicknames
Lockey (ianlockey.com. 01 May 2012)
Hobbies
Gardening, mountain biking. (paralympic.ca, 20 Jan 2014)
Memorable sporting achievement
Competing at the 2011 Winter X Games. (Athlete, 06 Mar 2014)
Most influential person in career
His wife Natasha. (Athlete, 06 Mar 2014)
Hero / Idol
US surfer Kelly Slater. (Athlete, 06 Mar 2014)
Injuries
He suffered a shoulder injury at the 2011 Winter Adaptive X Games at Copper Mountain in the US, which prevented him from finishing the event. (rosslandtelegraph.com, 07 Nov 2013)
Superstitions / Rituals / Beliefs
His superstition is never to call the last run. (ianlockey.com. 01 May 2012)
Sporting philosophy / motto
"Don't say 'I can't', but 'how can I?'"

"Are you breathing in and out?"
(Athlete, 06 Mar 2014)
Famous relatives
His father and brother were provincial golf champions. His brother has also competed for the New Zealand Iron Man team. (ianlockey.com. 01 May 2012)
Ambitions
To compete at the 2014 Paralympic Winter Games in Sochi. (rmoutlook.com, 28 Nov 2013)
Impairment
He has 50% use of his muscles from the waist down due to a serious crash while snowboarding in New Zealand. The accident crushed three of his vertebrae, resulting in an incomplete spinal injury. His equipment involves running a third strap, attached to his highback, so when he leans forward on his board the strap helps support the load. (rosslandtelegraph.com, 07 Nov 2013)
Other information
COACH
He is a mountain bike coach and co-founder of Kootenay Mountain Bike Coaching in Rossland, BC, Canada. (Athlete, 06 Mar 2014; paralympic.ca, 20 Jan 2014)

NEW ZEALAND TO CANADA
He was born and raised in New Zealand before moving to Canada and gaining Canadian citizenship. (Athlete, 06 Mar 2014)