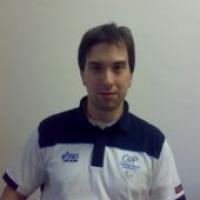 Most influential person in career
President of the Polha Varese sports club Daniela Colonna Preti. (Athlete, 08 Mar 2014)
Sporting philosophy / motto
"Always believe in yourself." (Athlete, 08 Mar 2014)
Impairment
He was born with spina bifida. (Athlete, 08 Mar 2014)
Other information
SANCTION
In March 2014 he was given an 18-month suspension by the International Paralympic Committee [IPC] after he returned an adverse analytical finding for a prohibited substance, clostebol metabolite 4-chloro-4-androstene-3a-ol-17-one, in an out-of-competition test three days before the 2014 Paralympic Winter Games in Sochi. The Italian Paralympic Committee claimed the substance entered his system as the result of a cream used to treat bedsores. The IPC accepted that Stella had not attempted to enhance his performance and applied a reduced sanction of 18 months from 04 March 2014. (paralympic.org, 13 Mar 2014; insidethegames.biz, 13 Mar 2014)