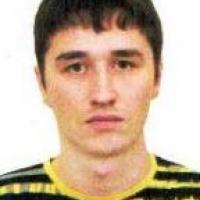 When and where did you begin this sport?
He took up the sport in 2010 in Aleksin, Russian Federation.
Why this sport?
After playing sitting volleyball he was invited to try Para ice hockey at the Phoenix club. The sport was just starting to develop in the Russian Federation at the time, and the club needed players to build a team.
Club / Team
SHC Ugra: Khanty-Mansiysk, RUS
Name of coach
Alexander Zykov [club], RUS; Ruslan Batyrshin [national], RUS
Preferred position / style / stance / technique
Forward

He received the Order for Merits to the Fatherland [first class] in the Russian Federation in recognition of his performance at the 2014 Paralympic Winter Games in Sochi. (kremlin.ru, 17 Mar 2014)

In 2014 he received the title of Honoured Master of Sport in the Russian Federation. (minsport.gov.ru, 17 Mar 2014)
Ambitions
To win gold medals at the world championships and the Paralympic Winter Games. (Athlete, 29 Oct 2020)
Impairment
At age 11 he fell under a train and had to have his right leg amputated at the knee. (prochepetsk.ru, 28 May 2014; Athlete, 06 Mar 2014)
Other information
MASTER CLASS
In August 2021 he held a coaching class in Para ice hockey for young players in Yekaterinburg, Russian Federation. "I actually came to a children's team for the first time as a mentor. The guys in Yekaterinburg are great, everyone's eyes are burning, everyone wants to ask a question. The questions were standard: how to hold the stick correctly, how to shoot, how to skate, how to push. For me this is already easy and simple, but for the guys this is all new - they try, but there are small technical flaws that we worked on." (oblgazeta.ru, 10 Aug 2021)