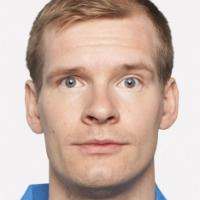 When and where did you begin this sport?
He first tried skiing at age four.
Club / Team
Ylojarven Urheilijat: Finland
Name of coach
Mikko Virtanen, FIN, from 2008
Training Regime
He trains for two to three hours each day during the winter, and does longer sessions in the off-season.

Memorable sporting achievement
Competing at the 2014 Paralympic Winter Games in Sochi. (Athlete, 10 Mar 2018)
Most influential person in career
Finnish cross-country skier Kati Lehtonen. (Athlete, 10 Mar 2018)
Hero / Idol
Finnish cross-country skier Mika Myllyla. (Athlete, 10 Mar 2018)
Injuries
His 2014 season was disrupted by illness. (paralympic.org, 17 Sep 2015)
Awards and honours
He was Finland's flag bearer at the opening ceremony of the 2010 Paralympic Winter Games in Vancouver. (lymedsport.com, 17 Jan 2014)
Ambitions
To win a gold medal at the 2018 Paralympic Winter Games in Pyeongchang. (yle.fi, 12 Dec 2016)
Impairment
His left arm was amputated at birth. He received his first prosthetic arm at age five. (hs.fi, 08 Mar 2010)
Other information
OCCUPATION
He purchased a cattle farm in 2016, and balances his training with working on the property. "Every day is a little bit different. Basically I wake up at 06:00 and after that, eat breakfast and go to the cattle shed and take care of the animals. At 09:00, I do my own training. Then lunch and after lunch a short nap, and after that a few things to do on the farm again. After that, some short training and again I have to give food to the animals. It's quite busy. It's a lot of work." (paralympic.org, 01 Feb 2018)

RETIREMENT PLANS
Having won bronze at the 2010 Paralympic Winter Games in Vancouver and silver four years later in Sochi, the 2018 Games in Pyeongchang are his final chance to win the elusive gold medal. "I [will] stop my career this year. This is my last race and last Paralympic Games. I have something else to do, a new life, a lot of new experiences and a lot of time spent on the farm." (pyeongchang2018.com, 06 Mar 2018)