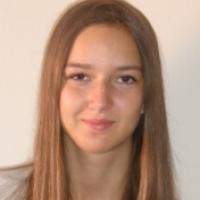 When and where did you begin this sport?
She took up skiing as a recreational activity at age four, and began Para alpine skiing in 2008 at Bjelasnica mountain in Bosnia and Herzegovina.
Why this sport?
She was first encouraged to try skiing by her father. She was introduced to Para alpine skiing by Bosnian Para alpine skier Senad Turkovic, who was a friend of her father. "My father is a great ski lover and he passed that love on to me. He wanted me to learn to ski and he succeeded. My love for the sport grew in me because of the influence of my first coach and my father."
Club / Team
SKOSI Ilmer: Sarajevo, BIH
Training Regime
In the northern hemisphere winter months she trains at Jahorina mountain and Bjelasnica mountain in Bosnia and Herzegovina. In the summer months she trains in Austria and other locations in Europe.

Memorable sporting achievement
Competing at the 2018 Paralympic Winter Games in Pyeongchang, and finishing eighth in the giant slalom at the 2019 World Championships in Slovenia and Italy. (Athlete, 13 Mar 2018; paralympic.org, 26 Jan 2019)
Most influential person in career
Her parents and late coach Senad Turkovic. "He is always in my mind when I'm skiing. When I race, every race is for him." (Athlete, 13 Mar 2018; paralympic.org, 26 Jan 2019)
Hero / Idol
Bosnian Para alpine skier Senad Turkovic, and her parents. (IPC, 10 Feb 2018; diskriminacija.ba, 15 Aug 2018)
Sporting philosophy / motto
"There are no physical limitations, the only limitations we have take place in our head." (IPC, 10 Feb 2018)

"Every fall is one step further towards success. I don't let falls throw me out of my rhythm. No one has ever succeeded without experiencing ups and downs." (nezavisne.com, 31 Aug 2019)
Awards and honours
She was named flag bearer for Bosnia and Herzegovina at the opening ceremony of the 2018 Paralympic Winter Games in Pyeongchang. She also carried out the same duty at the 2014 Paralympic Winter Games in Sochi. (pyeongchang2018.com, 09 Mar 2018; paralympic.org, 07 Mar 2014)

In 2016 she received the Nagrada Sarajevska Pahuljica [Sarajevo Snowflake Award] in Bosnia and Herzegovina. The honour is presented in recognition of exceptional achievements in the promotion and affirmation of general social values in curricular and extracurricular activities. (sarajevo.ba, 06 Apr 2016)
Milestones
In 2014 she became the first woman to represent Bosnia and Herzegovina at the Paralympic Winter Games when she competed in alpine skiing in Sochi. (SportsDeskOnline, 16 Mar 2014)
Ambitions
To win a medal at the 2022 Paralympic Winter Games in Beijing. She also plans to work in Para alpine skiing after she has retired from competing. (klix.ba, 01 Dec 2018; Zmajevo lice YouTube channel, 14 Dec 2020; mreza-mira.net, 26 Oct 2018)
Impairment
She was diagnosed with cerebral palsy at age three. A nerve in her knee was also permanently damaged during her delivery at birth. (Athlete, 08 Mar 2014; Zmajevo lice YouTube channel, 14 Dec 2020; diskriminacija.ba, 15 Aug 2018)
Other information
OCCUPATION
In December 2020 she took up an intern role as a software developer at Klika, a computer software company based in Sarajevo, Bosnia and Herzegovina. She also works as a web designer at Pamuk Doo Sarajevo, a digital printing and homeware company based in Bosnia and Herzegovina. (LinkedIn profile, 01 Jan 2021)

COACH'S IMPACT
Her first coach Senad Turkovic, who passed away in 2016, had a major influence on her career. "He noticed my talent and he encouraged me to compete in skiing. He offered to train me and prepare for competitions with the Paralympic Games as a main goal. After few years the hard work and all the effort brought some good results. Every race I have had and every race I will have are done in memory of my coach Senad Turkovic, who is no longer with us, but will always be in my heart giving me the strength and motivation to do my best." (IPC, 10 Feb 2018; Zmajevo lice YouTube channel, 14 Dec 2020; klix.ba, 15 Jul 2016)

DEALING WITH HER IMPAIRMENT
She says her parents have been influential in helping her to deal with her impairment. "Thanks to open communication with my parents I always considered myself as just another child, with no impairment. They taught me not to feel less valuable and to have no complexes. I do not like the word 'disabled' because it means incapable. I cannot say that it was hard to struggle with my impairment. It is part of me. I am used to this and accept it, so I don't consider my impairment as a life's struggle." (furaj.ba, 01 Dec 2017; Zmajevo lice YouTube channel, 14 Dec 2020)