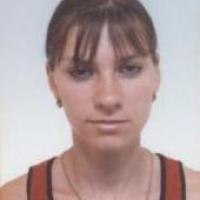 When and where did you begin this sport?
She took up the sport in 1998 at age 13 in Dnipropetrovsk, Ukraine.
Club / Team
Invasport: Dnipropetrovsk, UKR
Name of coach
Iryna Slyusar [personal], UKR, from 2009; Andriy Fateev [national]

She was recognised by the Ukrainian National Olympic Committee as one of three Paralympians of the Year in the Dnipropetrovsk region of Ukraine for 2012. (invasport.org.ua, 20 Mar 2013)

She has received the Ukrainian Order for Merits. (Athlete, 23 Feb 2011)
Impairment
She acquired cerebral palsy due to a birth trauma. (Athlete, 22 Oct 2015)