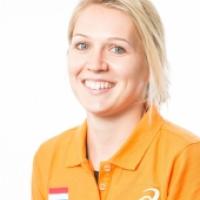 When and where did you begin this sport?
She took up athletics in 2009.

Hero / Idol
German Para long jumper Markus Rehm. (NPC media guide, 20 Oct 2015)
Injuries
In early 2017 her training was disrupted due to her being unable to wear her prosthetic leg because of pain in her right leg. She returned to her normal training schedule in March 2017. (irispruysen.nl, 2017)

She suffered from several muscle injuries after the 2014 European Championships in Swansea, Wales. (ad.nl, 21 Jul 2017)

She suffered a hamstring injury in 2013. (paralympic.org, 18 Jun 2013)
Awards and honours
She was named the 2013 Female Athlete of the Year in Zwijndrecht, Netherlands. (dordtcentraal.nl, 20 Jan 2014)
Impairment
In 2006 her lower right leg was injured following a gas explosion while she was attending a sailing camp in the Netherlands. Several days later doctors made the decision to amputate her lower leg. (nocnsf.nl, 01 Aug 2012; janvolwerk.com, 18 Jul 2012)
Other information
RETIREMENT
In January 2018 she announced her retirement from international Para athletics. "I haven't made progress since 2013. Partly due to injuries but my performances also remained behind in the periods that I felt good. I didn't dare to give it my all.'' (ad.nl, 05 Jan 2018)