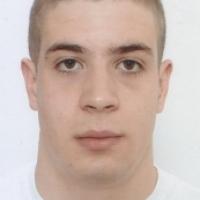 When and where did you begin this sport?
He took up the sport in 2010 in Zagreb, Croatia.
Why this sport?
He wanted to prove he could do anything, despite his impairment. He initially competed in sitting volleyball, but switched to athletics due to his preference for individual and strength based sports.
Club / Team
AK Uriho: Zagreb, CRO
Name of coach
Roland Varga [club], CRO
Training Regime
He trains for two hours in the morning and two hours in the evening.

He tore a ligament in his left foot during his first throw in the F44 discus throw at the 2016 Paralympic Games in Rio de Janeiro. He went on to finish fifth in the event, but required two months of rehabilitation following the Games. (sport.hrt.hr, 17 Sep 2016; jutarnji.hr, 21 Aug 2017)

He was named the 2015 Athlete of the Year by Croatian radio station Radio Imotski. (radioimotski.hr, 04 Apr 2016)
Other sports
He has represented Croatia in sitting volleyball at international level. (imotskenovine.hr, 28 Jul 2016)
Famous relatives
His partner Anamari Kozul has represented Croatia in hammer throw. She competed at the 2018 European Championships in Berlin, Germany. (SportsDeskOnline, 08 Apr 2021; radioimotski.hr, 01 Jul 2016)
Ambitions
To compete at the 2020 Paralympic Games in Tokyo. (slobodnadalmacija.hr, 08 Mar 2019)
Impairment
His right leg was amputated below the knee at three weeks old due to thrombosis. (Athlete, 07 Sep 2016; jutarnji.hr, 21 Aug 2017)
Other information
PARTNER
He met his partner Anamari Kozul in 2014, when his former coach Ivan Ivancic passed away and he joined Kozul's training group led by coach Roland Varga. "Nowadays, we train together, support each other, gain achievements together and look forward for more to come. We have love, which is not only ours, intimate to each other, but also love through this wonderful sport." (Facebook profile, 17 Jan 2021; slobodnadalmacija.hr, 19 Jun 2018)