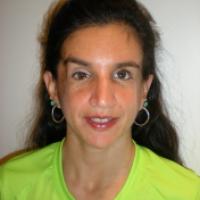 When and where did you begin this sport?
She took up running in 2001.
Why this sport?
"When I run, there's a sense of peace. It's a sense of freedom."
Name of coach
Joaquim Cruz [national], BRA
Training Regime
She trains at the US Olympic Training Center in Chula Vista, CA, United States of America.

Hobbies
Yoga, cross-country skiing, learning new languages, singing, reiki, hiking, long walks, going to the beach, travelling. (teamusa.org, 22 Jul 2015; LinkedIn profile, 2015)
Sporting philosophy / motto
"Never let a disability, self-doubt or negative energy get in the way of achieving goals and reaching for your dreams. Don't be afraid to fail, it's one of the ways to knowing what you are capable of doing." (teamusa.org, 13 Apr 2013)
Awards and honours
She received the 2008 New York State Women of Excellence Award in the United States of America. (iminmotion.net, 22 Feb 2011)
Other sports
She has competed in para-triathlon at international level. She has also climbed Mount Kilimanjaro in Tanzania. (iminmotion.net, 25 Mar 2015; iminmotion.net, 22 Feb 2011)
Famous relatives
Her husband John Schmidt has been her running guide. (today.com, 25 Mar 2015)
Impairment
She lost her sight at age two because of retinal cancer. Her eyes were removed to prevent the cancer spreading to her brain. (teamusa.org, 20 Apr 2013)
Other information
DANCER
She trained in ballet, tap and jazz with the National Dance Institute in the United States of America. She performed at venues including Madison Square Garden and Lincoln Center in New York, NY, United States of America, and John F. Kennedy Center for the Performing Arts in Washington, DC, United States of America. (iminmotion.net, 28 Feb 2010)

OTHER STUDIES
From 2006-08 she studied a master's degree in finance at Baruch College in New York. (LinkedIn profile, 2015)