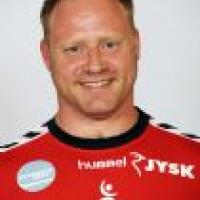 When and where did you begin this sport?
He took up athletics at age 20 in Denmark.
Why this sport?
In 1997 he set a national shot put record during a sports camp organised by the Danish Handicapped Federation. It encouraged him to continue with the sport because he could no longer play football.
Training Regime
He trains for up to four hours a day.

Memorable sporting achievement
Competing at his first Paralympic Games in Sydney in 2000. (dr.dk, 03 Feb 2016)
Injuries
A groin injury prevented him from competing at the 2014 European Championships in Swansea, Wales. (dhif.dk, 30 Sep 2014)
Awards and honours
He received the Culture Minister's Disability Sport Award in 2012. (dr.dk, 29 Jan 2013)
Impairment
His leg left was amputated at age 17 as a result of infection. (dhif.dk, 24 Jan 2012)
Other information
RETIREMENT
He announced his retirement from competitive para-athletics at the 2015 World Championships in Doha, Qatar. "Doha was my last competition as I will retire now, so it was nice to at least come away with a [silver] medal. My shot put category was removed from the Paralympic programme and it is the main reason to end my career. I have grown accustomed to winning, and for various reasons, that is no longer possible. I have thought long and hard about this since the 2015 World Championships, and it has become clear to me that the time is right." (paralympic.org, 27 Oct 2015; 17 Feb 2016; dr.dk, 03 Feb 2016)