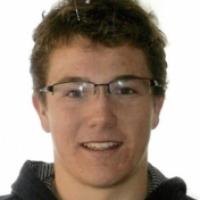 When and where did you begin this sport?
He first took up basketball and Australian rules football at primary school in Tasmania, Australia. He switched to swimming at age eight and competed against able-bodied swimmers until he took up Para swimming at age 18.
Why this sport?
He was keen on contact sports as a child and shifted to swimming due to the limitations in his peripheral vision.
Club / Team
University of the Sunshine Coast [USC] Spartans: Sippy Downs, QLD, AUS
Name of coach
Nathan Doyle [club]; Leigh Nugent [national], AUS

He was named the 2014 Male Swimmer of the Year and 2014 Multi-Class Swimmer of the Year by Swimming Tasmania in Australia. (theadvocate.com.au, 13 Oct 2014)
Other sports
He competed in able-bodied athletics at state school level in Australia. (theadvocate.com.au, 29 Dec 2017)
Famous relatives
His cousin Eli Templeton has played professional Australian rules football, including for Australian Football League [AFL] team St Kilda. (afl.com.au, 28 Oct 2016)
Ambitions
To compete at the 2020 Paralympic Games in Tokyo. (theadvocate.com.au, 13 Jul 2018)
Impairment
He was born with retinitis pigmentosa, a degenerative eye condition. (swimming.org.au, 30 Jul 2014)
Other information
PRIMED FOR TOKYO
After graduating from University of the Sunshine Coast in 2018, he decided to become a full-time athlete to work towards his goal of winning a medal at the 2020 Paralympic Games in Tokyo. "At the first Paralympics [in Rio de Janeiro in 2016] I was really happy just to make finals, but I don't want to keep doing that for all of my career. I want to get on the podium. I'll be 25 by the time Tokyo comes around so I think I'll be really coming into my prime." (theadvocate.com.au, 13 Jul 2018)

ATHLETICS
He took part in athletics throughout his schooling, and finished 11th in a 1600m Para race at the 2017 Latrobe Athletic Carnival in Tasmania, Australia. He says running has become part of his cross training for swimming. "I always used to go quite well with the longer [distance] stuff and cross-country running at school. I broke a couple of school records in year 12 in the 800m and 1500m until Ryan Powell broke them a year or two later, and I also won the state independent schools 1500m event in grade eight or nine. With our swimming we have implemented a bit of cross-training with more running and cycling. The goal is to have a crack [at competing] and see how I go. I think I know how to do it, it's just a matter of doing it. In the pool I know how to pace a race, but here I don't want to go out too hard and bust myself." (theadvocate.com.au, 29 Dec 2017)