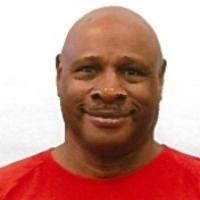 When and where did you begin this sport?
He began a variety of adaptive sports in 1999.
Why this sport?
After leaving the army following his accident, he developed post-traumatic stress disorder and depression. He was encouraged to try adaptive sports, which helped improve his mental health. "Sports really helped me. It takes my mind off the disabilities that I have and makes me look at the glass half-full instead of half-empty."

Awards and honours
He was named the 2014 Military Athlete of the Year at the Georgia Disability Sport Awards in the United States of America. (parasport-news.com, 16 Nov 2014)
Other sports
He competed in table tennis, bowling and archery at the National Veterans' Wheelchair Games. (georgiahealthnews.com, 13 Feb 2015; va.gov, 07 Jul 2010)
Impairment
He was injured in a humvee accident while serving in the US military in 1991, which resulted in brain and spinal trauma. (georgiahealthnews.com, 13 Feb 2015)