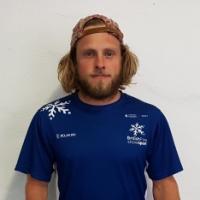 When and where did you begin this sport?
He began snowboarding in 2010 in Bulgaria, where he was on holiday with friends. He tried the sport again in the Netherlands, where he met British Para snowboarder Owen Pick, who encouraged him to get in contact with the British national team.
Why this sport?
"Having skateboarded and surfed all my life, I took to snowboarding like a duck to water. I grew up in Ramsgate and Broadstairs [England], going to school in Broadstairs where I gained work experience at the local skate park and a passion for being on a board. I then went on a snowboarding holiday and found that all my experience on a skateboard gave me confidence and the ability to snowboard well."
Name of coach
James Sweet; Karel van Goor, NED

Nicknames
Stubba [given to him by brother Olly and childhood friend Ben Wilkes. "We were in a car driving somewhere and Shabba Ranks' [song] 'Mr. Loverman' came on. [Ben] started shouting 'Stubba' between every line and it stuck from there."] (sidewalkmag.com, 01 Jan 2015)
Hobbies
Skateboarding, cycling, weightlifting. (Athlete, 04 Mar 2022; gbsnowsport.com, 29 Jun 2021)
Memorable sporting achievement
Competing at the 2018 Paralympic Winter Games in Pyeongchang. (chillypowder.com, 04 May 2020)
Most influential person in career
His mother. (sportsaid.org.uk, 01 Jan 2015)
Hero / Idol
British Para snowboarder Owen Pick. (sportsaid.org.uk, 01 Jan 2015)
Injuries
He sustained an acromioclavicular [AC] joint separation in his shoulder in December 2020 while training in Ruka, Finland. He returned to competition in February 2021. (insidethegames.biz, 12 Feb 2021; Instagram profile, 13 Feb 2021)

He broke his leg at the end of the 2015/16 season. He recovered in time for the start of the 2016/17 season. (reds10.com, 20 Sep 2016)
Milestones
At the 2018 Paralympic Winter Games in Pyeongchang he became the first British Para snowboarder to compete at a Paralympic Winter Games. He was the first British athlete to start during the first qualification run for the men's SB-UL snowboard cross event in Pyeongchang. (paralympic.org, 12 Mar 2018; gbsnowsport.com, 01 Apr 2018)
Ambitions
To win a medal at the 2022 Paralympic Winter Games in Beijing. (chillypowder.com, 04 May 2020)
Impairment
He was born without a right hand. (sidewalkmag.com, 21 Oct 2015)
Other information
PROGRESSION SINCE PYEONGCHANG
In 2021 he said he had progressed as an athlete since becoming the first snowboarder to compete for Great Britain at the Paralympic Winter Games in 2018. "I'm fitter, stronger and more knowledgeable than I was four years ago. Back then, I was quite new to elite sport and didn't know a lot about the athlete lifestyle, how to use the support staff in the right way and even how the Paralympics worked. Pyeongchang [in 2018] was a good trial run. I wasn't at the level I needed to be at to contend for medals but I knew what I needed to do and I started winning medals at the World Cup races the following season and gone on from that. I still have lots to learn but we are in a better place now." (bbc.co.uk, 24 Nov 2021)

EMERGENCY ACTING
He has worked for the United Kingdom Ministry of Defence as a casualty role-play actor, helping train soldiers in field surgery and trauma first aid. "Someone who was working for the [emergency simulation] company rang me when I was in the pub and she tried to explain the job to me, saying I had to pretend my hand from my stub had been blown off. Obviously I thought she was taking the piss so I hung up on her. Luckily she rang me back the next day and explained it again when I was sober, so I went up and met her and loved it." (sidewalkmag.com, 01 Jan 2015)