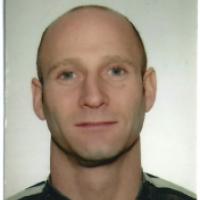 When and where did you begin this sport?
He began the sport in 2006.
Why this sport?
He was encouraged to take up the sport by British swimmer Mark Foster. The pair met on British television show Dancing on Wheels.
Club / Team
Barnet Copthall Swimming club: Hendon, ENG
Name of coach
Rob Greenwood [national]
Coach from which country?
Great Britain

Nicknames
The Giant Grey Yoda (mirror.co.uk, 29 Jun 2012)
Most influential person in career
British swimmer Mark Foster (mirror.co.uk, 29 Jun 2012)
Hero / Idol
South African swimmer Cameron Van Der Bergh. (goggleblog.com, 03 Sep 2012)
Sporting philosophy / motto
"My reaction time is good, but it’s just about improving the little things." (goggleblog.com, 03 Sep 2012)
Impairment
He lost both his legs in an accident at Milton Keynes railway station in England while celebrating New Year's Eve in 1998. He was playing around with friends on the station platform just after midnight when he was struck by a train. "The moments after were the most spiritually informative of my life. I felt as if I was being touched by a feather and that I heard this very sweet voice saying, 'Don’t worry, you’re not going to die, just relax'. A near-death experience gave me a completely different view of reality." (telegraph.co.uk, 05 Sep 2012)
Other information
DANCING ON WHEELS
He took up dancing after his accident and appeared on a British television show called Dancing on Wheels. He won the competition, and it was also where he met British swimmer Mark Foster, who convinced him to begin training as a para-swimmer. (bettermobility.co.uk, 10 Apr 2013; telegraph.co.uk, 05 Sep 2012)

OTHER ACTIVITIES
He teaches circus skills and also has a charity that takes children with an impairment to swim with dolphins in Mexico, Egypt and the United States. (telegraph.co.uk, 05 Sep 2012)

EARLY DAYS
He grew up in Zambia and moved to Somalia as a child where he learned to swim. (bettermobility.co.uk, 10 Apr 2013)