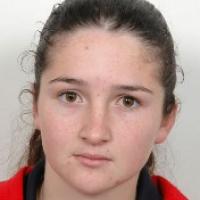 Nicknames
Macca (paralympic.org.au, 01 Jun 2011)
Hobbies
Photography. (Facebook page, 20 Oct 2018)
Hero / Idol
Australian wheelchair racer Kurt Fearnley. (paralympic.org.au, 01 Jun 2011)
Awards and honours
She was a part of the Queen's baton relay for the 2018 Commonwealth Games in Gold Coast, QLD, Australia. (Facebook profile, 13 Feb 2018; abc.net.au, 18 Oct 2017)
Impairment
She was involved in a car accident at age five, which resulted in her having a brain injury, causing her to have a loss of movement in her right side. (paralympic.org.au, 01 Jun 2011; abc.net.au, 10 Oct 2012)
Other information
PHOTOGRAPHY
She suffered from a speech impairment after the accident and used photography as one of the key forms of therapy that helped her re-learn speech. "I first used a camera as a way of communicating my stories in speech therapy and at primary school. My therapist described my language difficulties as being similar to having English as a second language, my problem is that I don't have a first language to fall back on. Having photographs that I had taken myself really reminded me of the words I needed." (abc.net.au, 10 Oct 2012)