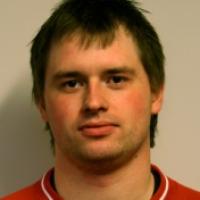 When and where did you begin this sport?
He took up the sport in 2007 in Bergen, Norway.
Why this sport?
He finds the sport fun and enjoys the fact that he can play at a high level.
Club / Team
Bergen KHK: Norway
Name of coach
Espen Hegde [national], NOR
Training Regime
He trains for two hours a week on the ice.
Preferred position / style / stance / technique
Defence

OCCUPATION
He is a certified prosthetist and orthothist. (Athlete, 06 Mar 2018)