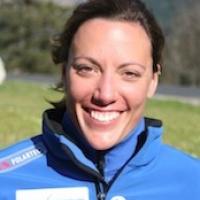 When and where did you begin this sport?
She began para-skiing in 2005.
Why this sport?
She went on a trip to the National Sports Center for the Disabled in the US where she tried skiing and loved it. She pursued the sport from that point.

Hobbies
Waterskiing, paragliding, scuba diving. (canada2010.gc.ca, 12 Feb 2010)
Injuries
She fractured her collarbone in January 2010. (yorkshirewired.co.uk, 15 Mar 2010)
Impairment
She became paralysed from the waist down in 2003 after severing her spinal cord when she fell down a flight of stairs. (wharfedaleobserver.co.uk, 14 Oct 2010)
Other information
PARALYMPIC RETIREMENT
In July 2012 she retired from skiing at Paralympic level. "I have actually just retired from Olympic skiing and have moved across to coaching because I’d had some injuries which knocked my confidence." (bedfordshire-news.co.uk, 20 Jul 2012)

BIONIC SUIT
In 2012 she took her first independent steps since her 2003 accident with the help of the 'bionic' ReWalk suit, invented by Israeli doctor Amit Goffer who himself has quadriplegia. The suit uses a brace support and motion sensors. "A girl did a marathon in it and I was desperate to try it. My balance isn’t great but once I became used to it I took my first few steps in nine years." She plans to train with the suit, but does not own it due to its high cost. (bedfordshire-news.co.uk, 20 Jul 2012)

FUNDRAISING FEAT
In October 2010, she helped raise thousands of pounds for alpine skiers by cycling 70 miles from Ben Nevis to the Cairngorn Mountains in Scotland. She described the feat as the hardest thing she has ever done. (wharfedaleobserver.co.uk, 14 Oct 2010)