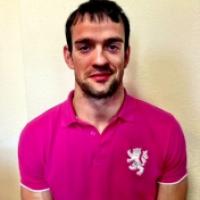 When and where did you begin this sport?
He took up the sport in 2010, and began training seriously after watching the 2012 Paralympic Games in London
Why this sport?
Para athletics coach Jean Laroche convinced him to try the sport.
Club / Team
CA Sherbrooke: Canada
Name of coach
Glenroy Gilbert [national]; Rick Reelie [personal]

Sporting philosophy / motto
"With a brave heart, nothing is impossible."[A quote from his high school English teacher] (impactcampus.ca, 09 Aug 2016)
Other sports
Prior to his accident, he won a gold medal in able-bodied weightlifting at the 2002 Quebec Games in Quebec City, Canada, and in 2006 he held the Canadian record for clean and jerk. (radio-canada.ca, 25 Apr 2013; paralympic.ca, 01 Nov 2015)
Ambitions
To compete at the 2020 Paralympic Games in Tokyo. (impactcampus.ca, 09 Aug 2016)
Impairment
He was involved in a car accident in 2007. He knocked his steering wheel while reaching into his bag to turn off his music player, which caused an accident that resulted in paraplegia. (radio-canada.ca, 25 Apr 2013)
Other information
WEIGHTLIFTER
At the time of his accident in 2007 he was Canada's number one ranked weightlifter, and expected to go to the 2008 Olympic Games in Beijing. After recovering from his accident in 2007, he attended the Games as a spectator to encourage his former teammates. He was unable to take up powerlifting due to his spinal structure, so Para athletics coach Jean Laroche suggested he utilise his upper body strength in wheelchair racing. . (ici.radio-canada.ca, 31 Aug 2016; paralympic.ca, 01 Nov 2015; torontoobserver.ca, 15 Sep 2016)

OTHER ACTIVITIES
He visits primary schools in Quebec to deliver lectures about overcoming adversity. "I try to make it clear that there are many obstacles in front of you, but the way you manage them allows you to accomplish even greater things." (impactcampus.ca, 09 Aug 2016)