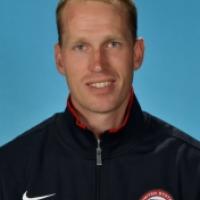 Why this sport?
He was noticed by his school's track and field coach while he was playing basketball as a sophomore in high school.
Name of coach
Jeremy Fisher
Training Regime
He trains at the US Olympic Training Center in Chula Vista, CA, United States of America.

Nicknames
Jeff (paralympic.org, 07 Jul 2015)
Hero / Idol
US basketball player Michael Jordan. (ossur.com, 18 Oct 2011)
Sporting philosophy / motto
"It's not what you do every four years, it's what you do every day." (teamusa.org, 28 Oct 2015)
Impairment
Born without a fibula in his left leg due to fibular hemimelia, doctors amputated his leg below the knee when he was less than a year old. (ossur.com, 09 Mar 2010)
Other information
MENTOR
He encouraged fellow US high jumper Roderick Townsend to take up para-athletics after meeting him in 2014 at a competition in Arizona, United States of America. Skiba has acted as Townsend's mentor and stepped in as his coach at the 2015 Parapan America Games in Toronto, ON, Canada, as Townsend's usual coach could not attend the event. (teamusa.org, 28 Oct 2015)

COMPETITION FIRST
In 2007 he became the first para-athlete to compete at the able-bodied US Indoor Track and Field Championships. (US Paralympics, 09 Mar 2010)

LAWMAN
He has worked as an officer for the San Diego Police Department in California, United States of America. (teamusa.org, 19 Jul 2013)