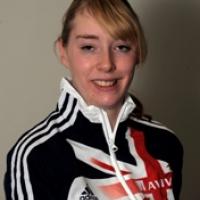 When and where did you begin this sport?
She took up the sport in 2006 at her local athletics club in Wales.
Why this sport?
She was interested in athletics from a young age and joined a club after she moved to Wales.
Name of coach
Paula Dunn [national], GBR; Keith Antoine [personal], GBR
Training Regime
She trains at the Sport Wales National Centre in Cardiff.

Hobbies
Riding horses, supporting English football team Manchester United, spending time with friends. (sportsaid.org.uk, 23 Mar 2015)
Memorable sporting achievement
Winning silver in the T37 100m at the 2010 Commonwealth Games in Delhi, India. (cardiff.ac.uk, 20 Oct 2015)
Most influential person in career
Her mother. (sportsaid.org.uk, 23 Mar 2015)
Hero / Idol
British middle distance runner Kelly Holmes. (sportwales.org.uk, 26 May 2012)
Sporting philosophy / motto
"Our deepest fear is not that we are inadequate. Our deepest fear is that we are powerful beyond measure." [Marianne Williamson] (motivational-paralympians.co.uk, 11 Nov 2012)
Ambitions
To win a medal at the 2017 World Championships in London, England. (sportsaid.org.uk, 23 Mar 2015)
Impairment
She was born prematurely and spent the first few weeks of her life in an incubator. At age six months, her parents were told she had cerebral palsy after doctors noticed she was not using her right hand. Her condition, known as hemiplegia, affects the movement in her right arm and leg. (freepressseries.co.uk, 30 Aug 2012)
Other information
OTHER ACTIVITIES
She has served as an ambassador for children's charity Sparkle Appeal in Wales. (sportsaid.org.uk, 23 Mar 2015)