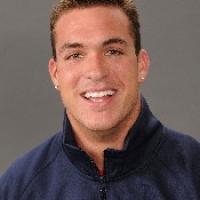 When and where did you begin this sport?
He took up Para athletics in 2003.
Why this sport?
His older brother Caleb played a number of sports and inspired him to compete too.

He was named the Male Athlete of the Month for May 2012 by the US Olympic Committee [USOC]. (perrytonpipeline.com, 06 Aug 2012)
Famous relatives
His brother Caleb Campbell played American football and was drafted by the NFL's Detroit Lions in 2008, but went unsigned as he was deployed into the US army just days after his selection. He later spent time training with the Indianapolis Colts and Kansas City Chiefs. (amarillo.com, 25 Jul 2008; oandp.com, 01 Nov 2008; kansascity.com, 30 Jul 2012)
Impairment
He was born without a fibula and ankle in his right leg. His tibia was also bowed at a 90-degree angle. Doctors amputated the leg below the knee when he was age one, and fitted him for his first prosthesis at age 15 months. (recordonline.com, 28 Jun 2007)
Other information
CHANGE OF DISCIPLINE
He originally competed in pentathlon and won gold in the P44 event at the 2008 Paralympic Games in Beijing. However, pentathlon was not added to the Para athletics schedule for the 2012 Paralympic Games in London, resulting in him switching his focus to discus. (ucentralmedia.com, 23 Nov 2015)