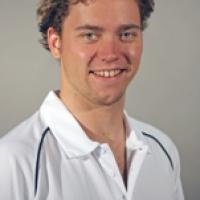 When and where did you begin this sport?
He began competing in 2003.
Why this sport?
He played water polo before he lost his vision, and wanted a different sport to play. "I didn't enjoy swimming as a kid, but once I lost my sight and water polo became too dangerous, I decided to swim."
Club / Team
South Shore Swimming Club: Perth, WA, AUS
Name of coach
Chris Twomey [club], AUS

Most influential person in career
His parents, and his wife. (paralympic.org.au, 2016)
Hero / Idol
His sisters. (paralympic.org.au, 29 Jun 2012)
Awards and honours
In 2018 he was inducted into the Rottnest Channel Swim Association [RCSA] Hall of Fame for completing the Rottnest channel swim, a 19.7-kilometre open water swim off the coast of Perth, WA, Australia. (rottnestchannelswimassociation.com.au, 08 Dec 2018)

In 2006 he participated in the Queen's Baton Relay in the lead-up to 2006 Commonwealth Games in Melbourne, VIC, Australia. (paralympic.org.au, 2016)
Other sports
He has represented Australia in Para triathlon and finished eighth at the 2013 World Championships in London, England. (SportsDeskOnline, 24 Apr 2020)
Ambitions
To compete at the 2020 Paralympic Games in Tokyo. (communitynews.com.au, 17 Sep 2018)
Impairment
He began to lose his sight at age 14 as a result of Leber's hereditary optic neuropathy. He would ultimately lose 98% of his vision. (Facebook page, 24 Aug 2016; jeremymcclure.yolasite.com, 08 Apr 2016)
Other information
OCCUPATION
He has worked as a remedial massage therapist in Australia. "I was quite interested in health and the body so I went to study personal training, which led to an interest in remedial massage." (swimming.org.au, 15 Sep 2019; trinity.wa.edu.au, 28 Mar 2019)

CHANGE OF CLASSIFICATION
In 2015 his impairment classification was changed from S12 to S11 due to a deterioration of his vision. "Dropping down to S11 means I have to race with blacked out goggles because I'm also competing against guys that are totally blind. That does slow me down a bit but if I can get back to my best ever time that would be a world record." (communitynews.com.au, 09 Aug 2016)